Even though we've started charging subscriptions through the Supporters' Club, you'll still be able to use all of the features of the app for free. We won't limit any functionality, and we won't introduce advertising into the app. Here's why we decided to go the route of the Supporters' Club. 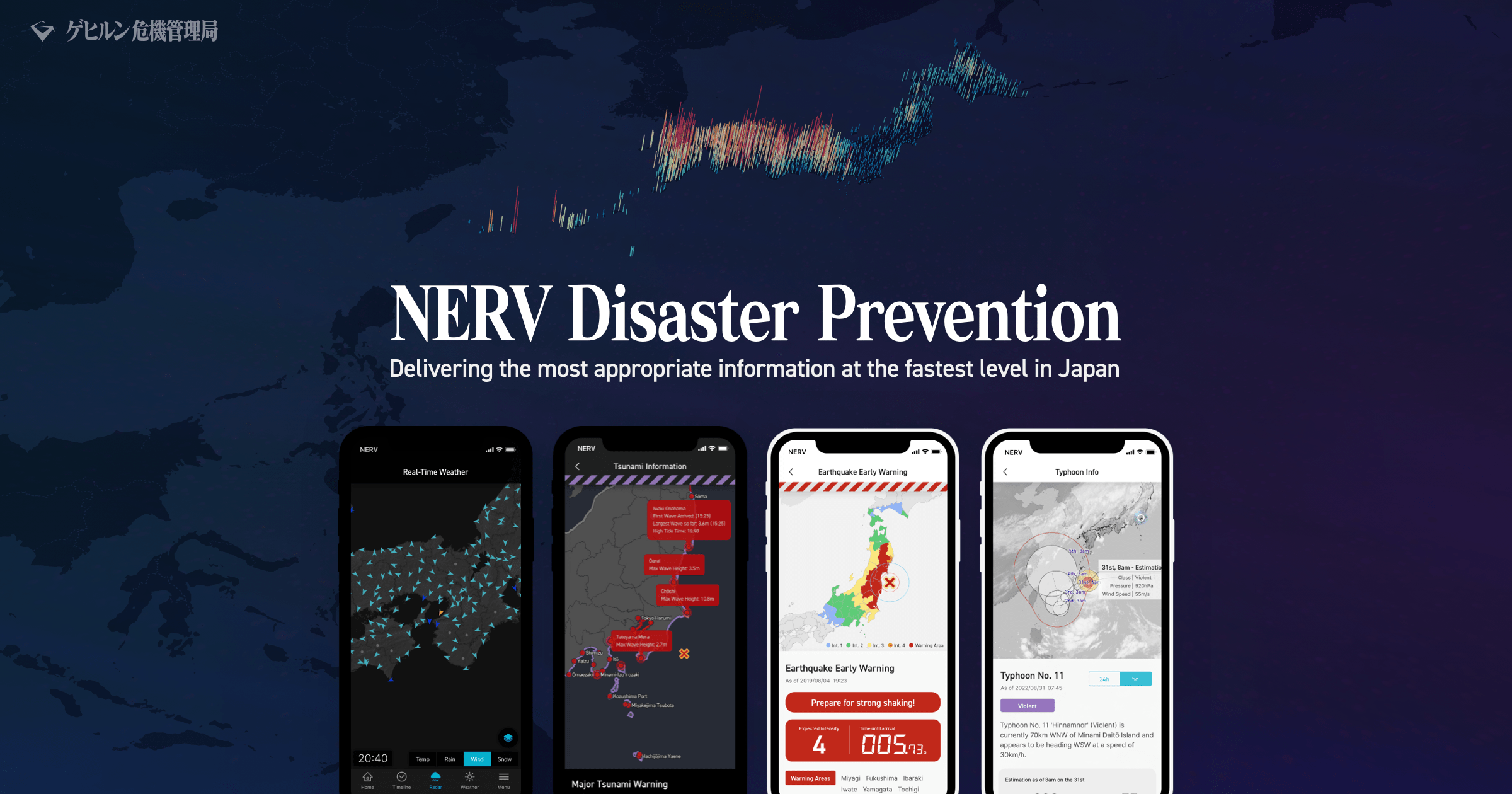 It's been 2 years since we released our app on the 1st of September, 2019. Initially, the app was only available for iOS, but soon after, many people downloaded it. In one day, we recorded 100,000 downloads. We'd like to extend our thanks to everyone who has been using the app.

We, the developers of this app, use it on a daily basis. It has become indispensable to us.

The development and operation of this app costs the management team around 60 million yen per year, which includes the cost of connecting to various institutions such as the Meteorological Services Support Center and the River Information Center, the cost of the data centres and cloud facilities, and the cost of operations. Currently these costs are covered by the revenue from other projects, so in order for us to be able to continue to operate independently for the next 5-10 years without relying on our other businesses, we wanted to ask for the support of our users.

Why a Supporters' Club?

The usual methods of generating revenue for an app or service is to either introduce advertising, or charge a premium for access to certain features/functionality. But for the NERV Disaster Prevention app, we chose not to take this route.

After many discussions, the development team sought out ways to charge for paid features, limit functionality and not advertise.

We built this app around on the theme of 'accessibility'. Since the purpose is to provide information to everyone, it was against the very philosophy of the app to implement features that would only be available to the people who'd pay for them. We felt that if only people who paid for the app could access important information, it wouldn't be 'accessible' at all. On another note, the engineers of our development team wanted as many people as possible to enjoy the features they had painstakingly created. "Even if an app has a million users, only a small percentage of that would be willing to pay. Even if only 1% had paid, it's sad to know that the other 99% won't ever get to see what we've created". As an engineer, it's frustrating to know that in the event of a major disaster, many people wouldn't be able to access features that were supposed to be there to help them.

The in-app advertising model was also contrary to our principles. The NERV Disaster Prevention App is one that a lot of people tend to open when a disaster happens. The introduction of advertising is a mechanism to generate revenue in the event of a disaster. This contradicts the goal of a disaster prevention app, which is that in order to make money, you need a disaster to happen. We found this model to be completely unacceptable.

In times of disaster, ideal network conditions can quickly degrade, and the display of advertisements can cause unnecessary network communication and slow down the loading of important content, preventing users from accessing disaster information quickly. This unnecessary communication also contributes to increased load on mobile networks, due to the increased traffic.

If you want to add an element of continuity to an app that aims to give users quick access to information, and to reduce the impact disasters as much as possible, we concluded that we should grow the app together with the fans and supporters who care about the app and its developers. This is how we came up with the idea of the Supporters' Club, a system that doesn't rely on functional limitations or advertising. 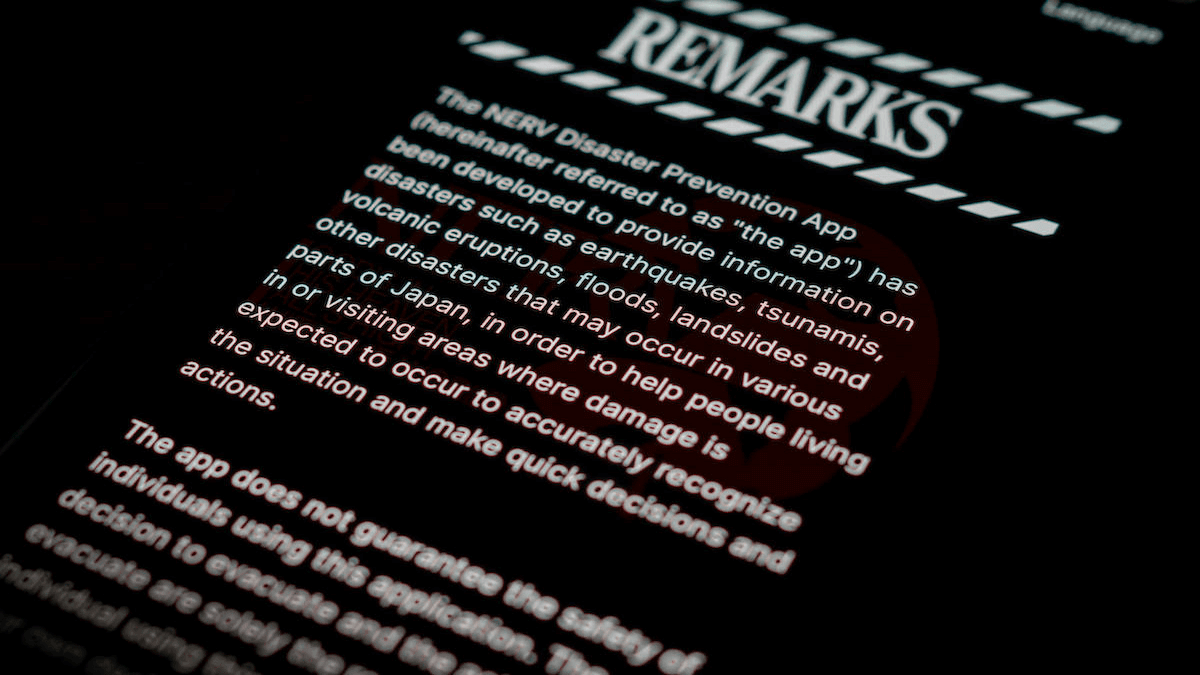 Find out about the plans and benefits of the Supporters' Club.

* Please note that the subscription price is determined by the App Store/Google Play Store based on the country/region your Apple ID/Google Play account is associated with, and may be different from the price displayed above.

The number of registered locations will be increased from 3 to 6.

A digital membership card will be displayed in the app to prove that you are a member of the Supporters' Club.

We offer 'Early Access' to upcoming features. Once we've developed a new feature, we'll first release it as a members-only feature. You will be able to use the new feature for a limited time before it's made available to all users. After a couple of months, the new feature will be released for free and all users will have access to the feature.

Get a behind-the-scenes look of NERV Disaster Prevention development and our efforts to contribute to disaster prevention. We invite our fans, who care about the app and its development team, to learn more about our efforts through members-only content available through the app.

If you would like to support the efforts of "NERV Disaster Prevention", please consider joining our Supporters' Club.

To check the status of your subscription to the NERV Disaster Prevention Supporters' Club, simply follow these steps.

Tap an above button from your Android device to check your subscription status.

On the day of your monthly renewal, you will be charged for the following month.
Your renewal date depends on the date you joined the Supporters' Club. You can find out your renewal date by following the instructions in the "How to check/cancel your subscription" section.

Option A. Upgrading to a higher plan

Your current plan will be terminated immediately, and you will be transferred to your newly selected plan. The fee for the current plan that you've already paid will be settled on a daily basis, and any unused portion will be refunded. Thereafter, the new plan will be renewed automatically every month, starting from the new renewal date.

You will be switched to the EE Plan on the 15th of September, and will be refunded ¥125 for the unused 15 days from September 15th to September 30th. You will be charged a new fee of ¥480 for the following month and your EE Plan will automatically renew from then on.

Option B. Downgrading to a lower plan

The EE Plan will continue until September 30th, and from October 1st, it will become the E Plan.

Option A. Upgrading to a higher plan

Your current plan will be terminated immediately, and you will be transferred to your newly selected plan. The fee for the current plan that you've already paid will be settled on a daily basis, and any unused portion will be refunded. Thereafter, the new plan will be renewed automatically every month, starting from the new renewal date.

The E Plan costs 250 yen per month, so the daily rate is 8.33 yen per day.
Since you have been using it for 15 days, you have 125 yen left unused, which will be applied to your EE Plan.
As the EE Plan costs 480 yen, you'll be given access to the EE Plan for 8 days (to use up the remaining credit), and September 23 will be your new renewal date. On September 23, you will be charged 480 yen for the next month, and the EE Plan will be automatically renewed after that.

Option B. Downgrading to a lower plan

The EE Plan costs 480 yen per month, so the daily rate is 16 yen per day.
Since you have been using it for 15 days, you have 240 yen left unused, which will be applied to your E Plan.
The E Plan costs 250 yen, so it will be for 29 days, and you will be charged 250 yen for the following month on October 14th, and the E Plan will be automatically renewed thereafter.

For the iOS version of Early Access, you will need to turn on the "Early Access" feature in the menu after you have started your subscription. 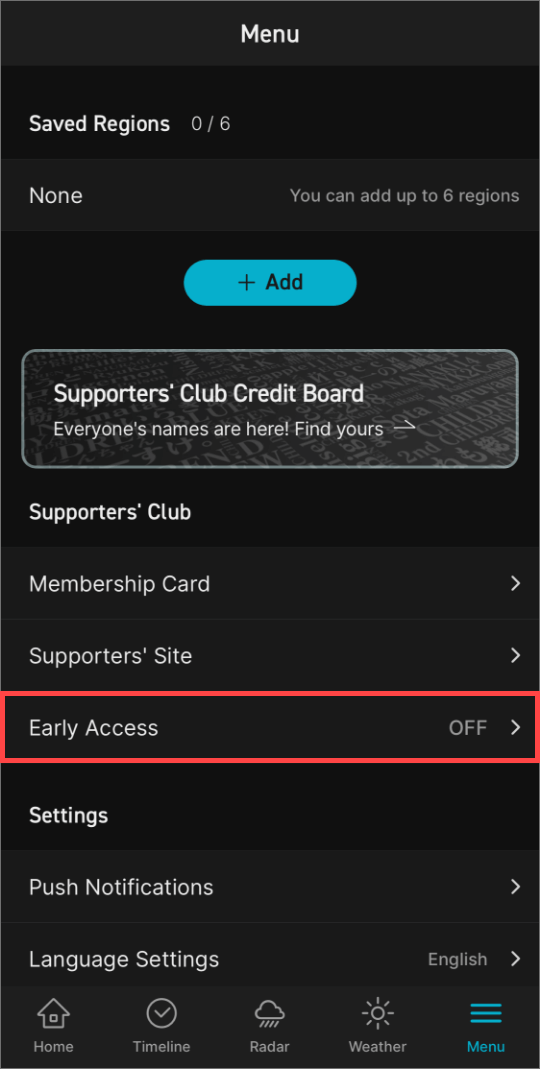 Select "Early Access" under the Supporters' Club header on the menu screen. 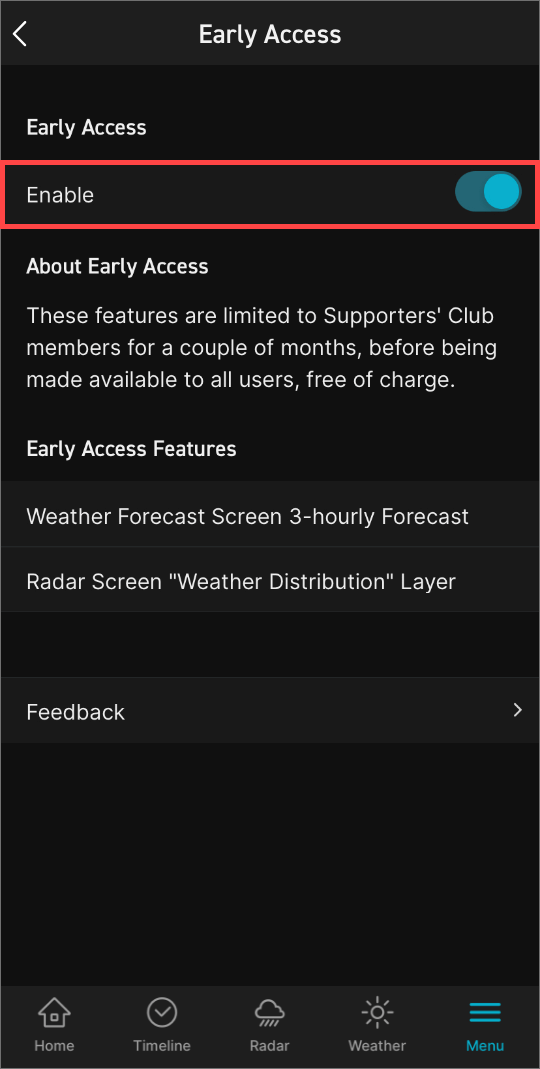 Tap "Enable" to turn it on.